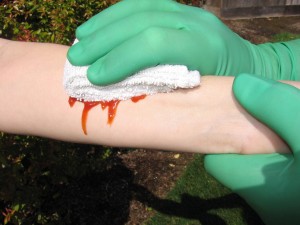 Major bleeding or severe bleeding, as stated in its name, implicates loss of great amounts of blood. Movies have probably portrayed all scenes that lead to major blood loss: losing control over cars leading to major accidents, walking randomly and getting shot or stabbed hitting major organs, and even major blows to the head. These wounds are classified as deep, causing trauma to layers deeper than the skin. More often than not, these wounds are penetrating and chronic. They take longer time to heal, usually over an unpredictable amount of time, and are more dangerous especially when left untreated by a medical professional.

There are three types of blood vessels in the body: artery, vein and capillary. The deeper, thicker blood vessels are the arteries. They bring the oxygenated blood from the heart to the different parts of the body. There is higher pressure among the arterial walls. Alternatively, veins are the more superficial and thinner blood vessels. These vessels bring the deoxygenated blood back to the heart. Lastly, capillaries are the smallest blood vessels, where the carbon dioxide and oxygen exchange occur. In terms if bleeding, among the three types of blood vessels, the hardest to control is arterial bleeding. It is the most severe as the high pressure from the arterial blood flow is causing the blood to spurt. A steady flow of blood will be observed in venous bleeding, while capillary bleeding are slow and oozing. However, capillary bleeding has the highest risk of infection (Captain Dave Inc. ND). Call for the nearest first aid providers to attend on the emergency and conduct professional medical treatment.

Watch this video from YouTube about First Aid for Splints & Bleeding Wounds : How to Apply a Pressure Bandage

However hard it is to control severe bleeding, there are ways to minimize the bleeding until paramedics arrive. Before handling the victim, wash hands and put on gloves to minimize risk for infection. Displaced organs in the abdominal region should not be put back into place; rather, the wound/s should be covered with a dressing. It is important to lay the injured person down with head marginally lower than the body trunk with the legs elevated while the victim should be covered in order to avoid the loss of body heat. While wearing gloves, remove only the superficial dirt or debris from the wound. Deeply embedded objects, such as knives and bullets, should not be removed in order to prevent aggravation of the bleeding. Deep pressure should be applied directly on the wound using dressings until the bleeding ceases. It is important to keep the pressure in place, applying new dressings over the old ones instead of removing soaked dressings to avoid disturbance (Mayo Clinic ND).

If the bleeding does not stop, squeeze the main artery delivering the blood to the area. There are different pressure points located all over the body for specific areas. While one hand is continually putting pressure on the wound, the other hand must squeeze the artery. Apply a pressure bandage over the wound (Mayo Clinic ND). Bluish fingertips or toes may indicate a bandage impeding circulation. Proper bandaging may be learned in standard first aid certification offered by various institutions like St Mark James which offer programs educating for various life-threatening emergencies. Once the bleeding has ceased, immobilize the injured area. Do not touch the bandages and call for emergency medical response or go to a doctor.