Acute alcohol intoxication occurs mainly in heavy drinkers specifically in the young adult population as well as those older than 60 years old. Alcohol is one of the most common and prevalent psychotropic substances that is widely circulated around the world that is known to affect mood, judgment, behavior, concentration and consciousness.

Most individuals who abuse alcohol have a wide array of reason why they indulge and abuse alcohol. Alcohol abuse may stem as early as in the home where an individual’s parents are identified as alcoholics themselves. Moreover, social exposure as well as peer pressure aggravates alcohol consumption towards an individual’s later life which consequently will lead to alcohol intoxication if not properly intervened.

Alcohol Intoxication in the Emergency Department

There is a high prevalence of alcohol intoxication and alcoholism among patients being admitted in the Emergency Department. Since a lot of individuals and patients who habitually abuse alcohol are one of the most common and frequent incidents in the ED, they often frustrate and tax healthcare professionals and  personnel who care for them due to several reasons such as violent outbursts and more importantly severe complications regarding their long-term health. The management of alcohol abuse normally would require health professionals especially those in the Emergency Department to be patient, thoughtful and considerate in their care of individuals afflicted with such recurring problem.

Alcohol or ethanol is considered a multisystem toxin that causes CNS depression which in turn leads to more pronounce symptoms such as drowsiness, impairment in coordination, slurred speech, abrupt changes in mood, sudden outburst of aggression, belligerence, elated feelings of grandeur, uninhibited and non-conforming behavior. In excess, alcohol intoxicated individuals can lead to stupor, coma and eventually death. Increasingly, one of the most alarming statistics comes from underage minors and college students who arrive at the ED, intoxicated with signs of alcohol poisoning resulting from binge drinking sessions which almost always lead to mortality.

Individuals admitted in the ED for alcohol intoxication usually assess for head injuries, hypoglycemia (since it mimics the symptoms of intoxication), as well as other pertinent health problems which the emergency nurse finds noteworthy during assessment. Treatment normally includes quick detoxification of acute poisoning, recovery and rehabilitation. The most common defense mechanism of individuals suffering from alcoholism and alcohol intoxication is denial and defensiveness. It is therefore very important that health care professionals who are actively involved in their care should approach these individuals in a calm and non-judgmental manner while speaking in a calm but firm voice and in a slow , manner since alcohol intoxication deeply impairs the individual’s thought process. 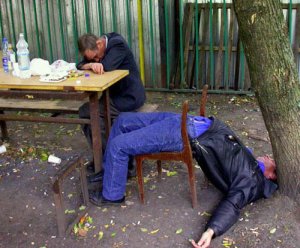 If drowsy, and with vital signs stable, the individual is normally allowed to sleep off the state of alcohol intoxication. During this time, proper maintenance of a patent airway must be closely monitored and observation for symptoms of CNS depression is very vital to prevent further untoward reactions and complications. On the other hand, violent and/or belligerent individuals under the state of alcohol intoxication can be sedated but must be constantly monitored for hypotension and decreased levels of consciousness.